As an integration developer, I am a big fan of standardization and reusability, especially when working with more people on the same projects. Therefor, I find it unfortunate that Mulesoft does not offer the possibility to create a domain project for cloud-based projects. I’d like to use certain properties, flows, files or transformations in more than one project and recreating them in every single project can lead to problems when you need to update it (there is no bigger pain than to have to go through all of your projects when one single constant needs to be adapted). Creating a common utilities project is an elegant solution for this problem. I tried to create one a couple of years ago, when I was still a Mulesoft newbie and failed. I recently tried again and found it was much easier than I expected. Here’s how I did it.

Oh yeah, before I forget, I did this for Mule 3. I think Mule 4 works a tiny bit different, but I haven’t tried it out just yet.

Obviously, the first thing you need to do is to setup your project. In your anypoint studio, create a new project with maven (I’ve used maven, but I suppose it will also work with other tooling), as you would do for any other regular project. When it’s created, open the generated pom.xml file. On the main level, there is a tag called packaging, which is by default set to ‘mule’. Change this to ‘jar’:

As far as the setup goes, this is the most important part. When the project is built, it will now create a jar file instead of a deployable zip file. This jar can be used as a dependency in other projects.

You can now start creating all kinds of flows, but let’s start easy: create a simple sub-flow with just a simple logger in it, saying something like ‘hello from the common utils!’ 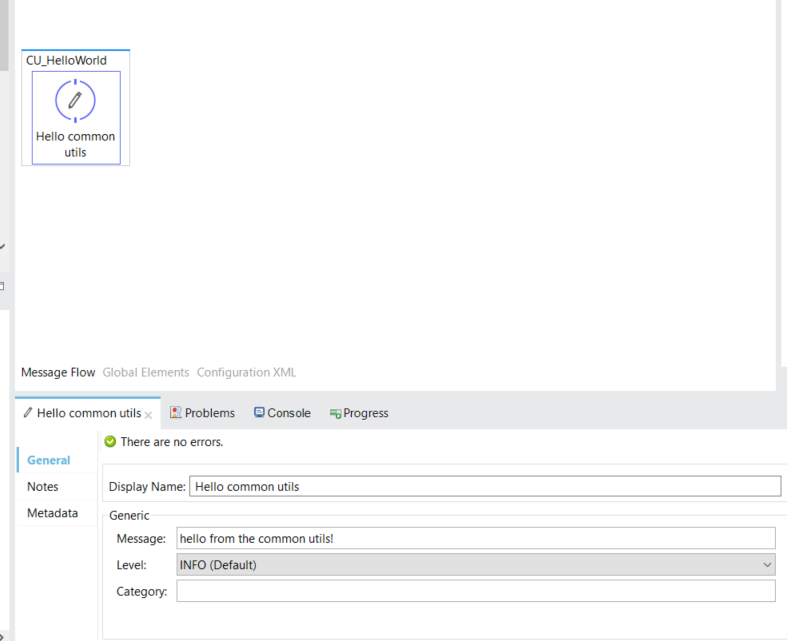 Before we continue, a quick word on the naming of flows in your common-utils project. When you include them as a dependency in your other projects, these flows are treated as if they are part of your project. Since you can’t have multiple flows or subflows with the same name, you’ll have to make sure the flow names in your common-utils project are unique. I suggest using a prefix. As you can see in the screenshot, we chose to use CU_. Whenever you see prefixes like that or similar to it in the rest of this article, know it probably means this was done to ensure unique names.

After saving and building, check the referenced libraries of your project and see that the jar has been added. 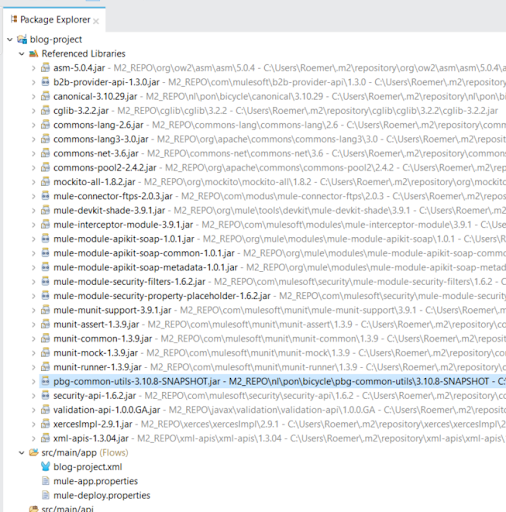 You’re almost good to go now. In order for your project to be able to use the flows of the common utils, you need to import it. Go to the Global elements and create a spring import (I usually do this in the Configuration XML). Add the following import:

blog.xml is the file where I created the CU_HelloWorld subflow in earlier 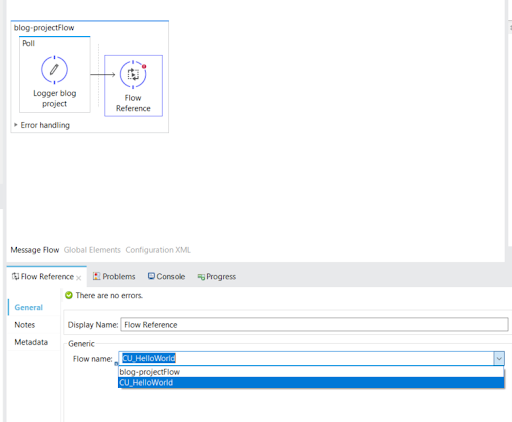 Let’s debug the project to see if it works.

Now that you’ve verified that you can create a common utils-project and are able to use it, create all the flows that you want (more on that some other time). When you’re done, release the project as you would with any other normal project, using your favorite tools and repo’s. We use Jenkins to release it to Nexus. Afterwards, update the project you use the common utils in to use version 1.0.0 instead of 1.0.0-SNAPSHOT.

So, that’s it for setting up, using and releasing your common utilities project. Try it yourself and have some fun playing around with it. For example, have you considered adding common error handling to it? On another occasion, I’ll explain about that, together with using properties files and common dataweave functions.

This is how to set up and use your common utils project: